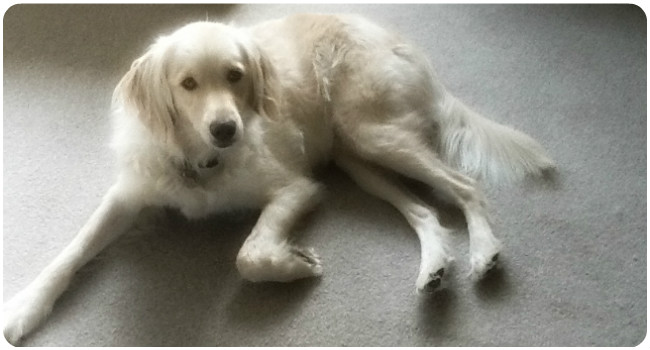 Owning a pet (or letting them own you) is a lifelong commitment. It’s one that ensures companionship, love and attention for years to come, and as any pet owner knows once you’ve been lucky enough to share your life with a colourful character you ll always have a soft spot for a furry friend.

One of our insured pet owners wrote in recently to thank us for handling their second dog insurance claim. Meet John and Jan Oliver, proud owners of Foxy, their young Labradoodle, who was recently successfully treated for Addison’s disease.

My wife Jan and I have been retired for some 15 years or so, and over the years we have shared our lives with cats and dogs of all shapes, breeds and sizes since we were married in 1961, John told www.pet-insurance.co.uk. Foxy joined us in January 2013. Currently we also have two cats who are still trying (without success) to teach Foxy how to behave in the presence of superior beings.

Labradoodles… one of the most popular new pedigree types

Originally bred from a Standard Poodle and a Labrador Retriever to create a special breed of low allergy guide dog, Labradoodles are one of the most popular new pedigree types for puppy policies in the UK. Their popularity comes in part from combining the best of the two breeds personalities, as well as the increased chance for producing allergy friendly puppies, their lack of shedding and reduced doggy smell and their undeniable good looks.

… loves nothing better than chasing and being chased…

The Olivers told us that despite not being the most exemplary Labradoodle, Foxy truly is one of a kind. Foxy came from a very reputable breeder of Labradoodles in Herefordshire, but because of a recessive gene his coat was not hypoallergenic and he is determined to spread as much of it as possible around our floors. Even though he cost far less than a typical Labradoodle, in our opinion he’s worth far more and looks far more handsome. He loves all other dogs and likes nothing better than chasing and being chased around. He can’t understand why our two cats aren’t so keen.

Unfortunately, earlier this year the Olivers noticed a few early warning signs that Foxy was in distress. He stopped eating and became very lethargic. We assumed at first that this was a stomach upset but the rapid deterioration in his condition led us to take him to our vet.

As Foxy’s vet diagnosed, the symptoms pointed towards Addison’s disease. Characterised by lack of appetite, vomiting, weight loss, diarrhoea, depression, a weak pulse and other such symptoms, Addison’s disease is caused by the inadequate secretion of hormones by the adrenal cortex, by metastatic tumours or by long term glucocorticoid withdrawal. It affects humans too, but in dogs the disease is more often found in young to middle-aged females and has been known to affect certain breeds (including Standard Poodles) more than others.

After diagnosing Addison’s disease, Foxy was rehydrated overnight in the veterinary hospital and he was given a course of medication. On the basis of what our vet had advised, Foxy’s blood pressure was so low and his heart rate so fast that had we not sought medical intervention we could have lost him. As Foxy was insured, our vets submitted the claim to www.pet-insurance.co.uk on our behalf which was settled in full without delay in a matter of weeks.

Before Foxy, the Olivers previous dog Millie had also been insured with us and the family didn’t hesitate to take out a new policy to cover their newest family member. We chose www.pet-insurance.co.uk because we had experienced a similar prompt and efficient settlement without quibbles when we lost our previous dog Millie. We have always insured our pets but when our premiums started to rise dramatically we decided to search for a more competitive provider who offered similar terms at a more reasonable cost.

Looking towards a happy future

The Olivers (and Foxy) are now looking to a long and happy future together, and we re happy to be there too. On the basis of our experience with the claims that you dealt with for both Millie and Foxy we are delighted to have chosen www.pet-insurance.co.uk and have no hesitation whatsoever in recommending you to our fellow pet owners.

You and your Pet