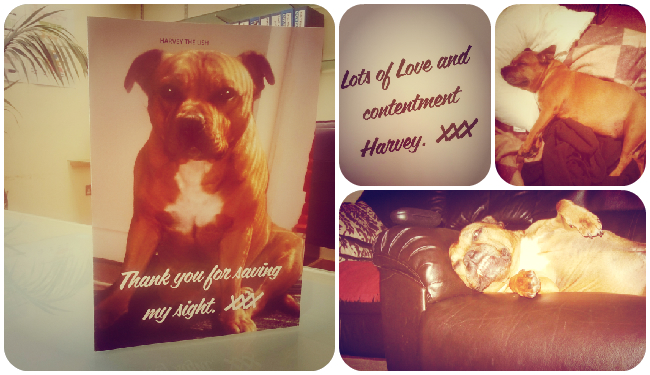 We love to hear from our insured pet owners with good news regarding their loved ones, and especially so when we re handed a paw-written thank you card personally from the pets themselves. This is Harvey, a Staffordshire Bull Terrier. He’s a happy chappie having just been successfully operated on for problems with his sight (and he’s obviously a dab hand at the fine art of card writing too).

I’m a CCTV engineer so I’m well aware of what good vision comprises. So says Tony Holland, one of our insured pet owners from Poole. In the case of my dog Harvey, he was losing his around three months or so ago. We noticed his eyes were starting to become cloudy and he then started bumping into things.

Like many pets this was not Harvey’s first claim

Our stats show that problems with your pets vision resulted in around 3% of all received pet claims from 2014 and represented roughly the eighth most common claims category. Plus, the chance of developing problems increases with their age and out of a sample of our claimants we found that 68% of policyholders who claimed in 2014 had already made at least one previous claim over the course of their pets lives.

Harvey had a leg joint problem in the past which we were happy to settle, and both Harvey and his owner knew they’d be in good hands should they ever have to make another claim in the future. I contacted www.pet-insurance.co.uk to instigate a claim and they were really efficient, Tony said. From claim to acceptance to the completion of Harvey’s operation only took approximately eight or nine weeks.

The claims procedure couldn’t have been easier…

The claims procedure couldn’t have been easier according to Tony. I downloaded a claim form from their website, filled it in, scanned and emailed it back the same day. That was it. We chose the option of dealing with the vets direct as we don’t have loads of money to pay for expensive procedures upfront then claiming it back. It’s great to have this option with no worries.

I’m so glad I chose them to insure Harvey, Tony says. They have been fair and understanding when it comes to claiming. In this day and age when vet’s bills can be horrendous, you have to have a good pet insurance policy in place and it’s reassuring to know you have a great company to rely on when in need.

You and your Pet